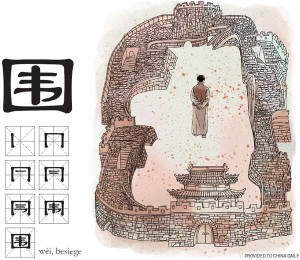 Fortress Besieged (Simplified Chinese: 围城; Traditional Chinese: 圍城; Pinyin: wéi chéng) was written by Qian Zhongshu, published in 1947, and is widely considered one of the masterpieces of twentieth century Chinese literature. The novel is a humorous tale about middle-class Chinese society in the late 1930s. It was made into a popular television series in the early 1990s.

The title is based on a French proverb:

At first, they called her “truth” because “the truth is naked”. But then, she’s not actually completely naked. So they amended it to “partial-truth”.

Familiar with the whole Western history of ideas, Qian shed new lights on the Chinese classical texts by comparing them with Western works, showing their likeness, or more often their apparent likeness and essential differences.

Qian Zhongshu was one of the Chinese authors best known to the Western world. Fortress Besieged has been translated into English, French, German, Russian, Japanese and Spanish.